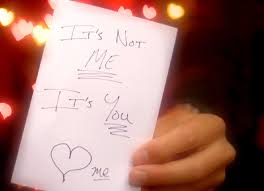 I have been working hard at banishing the thought from my head that this breakup and the most-negative contents of the relationship were my fault.  I have been writing lists, indicating things I can do now that I wasn’t “allowed” to before.  They’re written everywhere.  On my computer, on junk mail, in my  planner, on scraps of paper, on the back of Kizz’s heartworm med box.  Whenever I have a thought, about something I can do now that I couldn’t do then, I write it down.  In my mind, this will free me from the bad feelings I have about this relationship.

My memory of the past two years is a bit hazy.  When I was severely ill, a lot of those memories didn’t get locked down tight.  And, I’m just guessing, that a lot of the traumatic moments between us didn’t get remembered either, simply because of their nature.  But the thing is, the last six months of the relationship are crystal clear.

And guess what?  This was not my fault.  I try to tell myself this.  But I can’t help but wondering why I stayed so long, why I put up with the things I did, why I went along with the things he wanted me to do, why I let him put me in a little, tiny box and throw away the key to the outside world.

I am like a woman, half-drowned, getting her first gasps of air.  I am socializing now, even if it’s only immediate family (and Rock, of course).  I am staying up later and finding no ill effects.  I am doing what I want to do during the day, when I am not at work, and it is such a freeing feeling.

In the m0nths before we broke up, I was always trying to stay at work late or come in early, because I didn’t want to be at  home.  I signed up for every mission, every bank run, every errand.  I just did not want to go home.  And, at the time, that wasn’t a big red flag to me.

I saw my dad today, and he helped me take a ton of DSB’s medical supplies to the hospital to donate.  I know I should probably hang onto some of the other stuff he left, just in case, but those medical supplies were expensive and I know that is what he wanted done with them.  It is so nice to have all of those cardboard boxes out of my living room.  I mean, the living room has been packed with them since January and now, nothing but furniture and a TV.  I’m loving that, and so is Kizzie, because she gets to hang out on Momma’s lap while we watch mindless TV.

It is going to take me and mom a lot of time, but we’re going to get the house totally cleared up.  Rugs professionally cleaned, furniture steam cleaned, the works.  She’s also going to do some patching on a few holes in the plaster that have been gone through with a chair.  She says, and I believe her, that we will have this place so clean that I won’t believe it, and it will be very easy to keep it that way.  She even dangled the carrot that it would be possible that, if it were cleaned up and kept clean, that my sister might want to visit with my nephew.  I could die, if that happened.

It would be great period, if I could start having people over again and not be ashamed of what my house looks like.  My stepsister and her two kids will hopefully come this summer, if I can get the pool operational.  My dad, although he doesn’t like Kizzie (afraid of dogs), might even come in and we can sit outside in my backyard and shoot the shit.  My mom kept coming over through it all, but she did tell me how much more comfortable she is coming over now that he is not here.  I guess I’m so oblivious, that I didn’t realize she was uncomfortable in the first place.

This is a time of growth, and I am having more good times than bad times (although I’m not sleeping), and I’d have to say that getting him out of here is the best decision I have made in ages.  Years.  A really long time, anyway.  Now I just have to start building myself back up from the ground, which will likely be a daunting project, but I’m ready for it.  I have some goals I want to accomplish, and for the first time in a long time, I don’t feel like I need anyone’s permission, and I can focus on what it is that makes me happy. 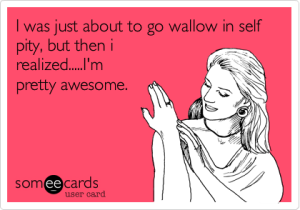